Posted at 17:36h in Featured, Uncategorized by Rita 0 Comments
0 Likes 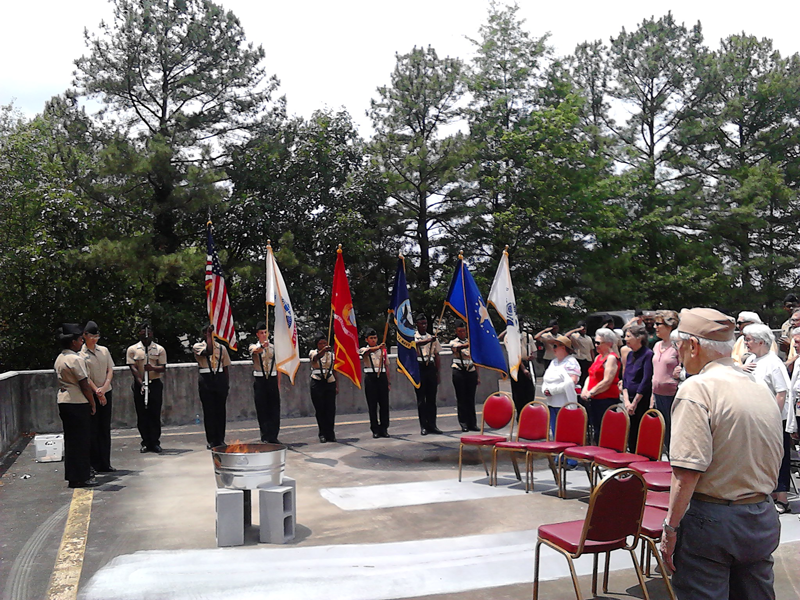 Tommy Miller, Executive Director of Mount Vernon Towers, notes that all residents at the Towers who wanted to retire their flags were invited to donate them for the ceremony.

“We had an ROTC Honor Guard that performed during the well-attended ceremony, and it was very moving for all of us there. It is a solemn and impressive process,” he says.

According to the National Flag Foundation, the procedure follows strict guidelines.

During the ceremony, only one flag is used, representative of all the flags to be burned in the service. The ceremony is conducted out-of-doors, and should be very special.

Also, the ceremony involves two color guards, one for the flag currently in use and a special color guard for the flag to be retired from service. After leading the audience in the Pledge of Allegiance to the Flag, the color guard slowly and ceremoniously lowers and respectfully folds the flag in the customary triangle.

Then follows the “Ceremonial Burning.” First, each flag is torn into shreds along the stripes of the flag.  Then, the shredded flags are placed in a container and burned.  They never touch the ground.  While this takes place, “God Bless America” is sung and a special message about the meaning of the flag is shared. When the flags are completely consumed, the fire is extinguished and the ashes buried.

“We are gathered here to destroy these flags that have been deemed no longer serviceable. It is proclaimed that each of these flags has served well.

These flags have inspired those who desired the taste of freedom and have represented hope to those oppressed by tyranny and terror. These flags have welcomed any and all in the name of liberty.”